You are here: Home / Construction Process / Types of RCC Beam

Beam is a structural member which is normally placed horizontally. It provides resistance to bending when loads are applied on it.

Various types of materials such as wood, steel, aluminum, etc are used for constructing beam. Most commonly used material for beam is RCC (Reinforced Cement Concrete). 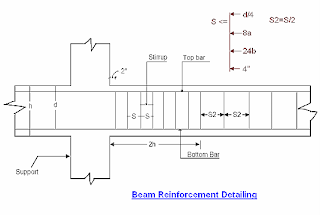 RCC beams are 4 types depending on their supporting systems.

The explanation of each type of beam is given below –

This type of beam has a single span. It is supported by two supports at both ends. This beam is also called simple beam.

This beam doesn’t have more than two spans. And supports are not more than three. Technically this beam is a continuous beam.

It has only one support in one end, another end is open.

There is another type of beam we can see in the civil engineering world which is called over-hanging beam. This beam extends beyond its supports. Actually this beam is a combination of simply supported and cantilever beam.

As I said above, placing beam reinforcement differs in the different types of RCC beams. I’ll write about this later here in this blog.

Your Turn:
Is there any other type of beam you know about? Please share in comment below.